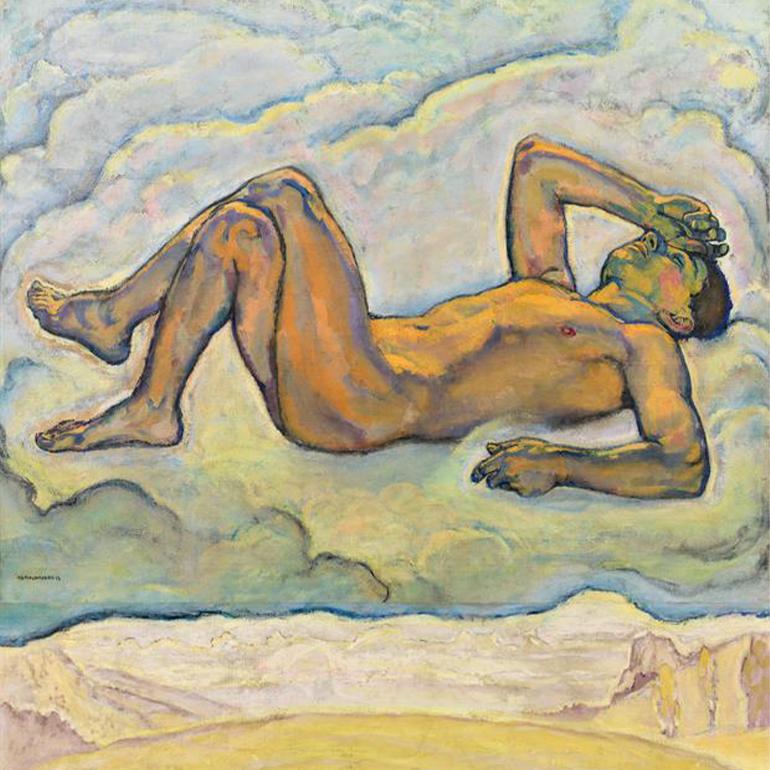 The absolute Highlight and most expensive Lot in 2020 found a new owner during our auction in June. It is a large painting in two parts from Koloman Moser, titled “loneliness in the fields” from 1912/13 which depicts a young man reclining in the clouds. The work had been considered lost for a long time until the owner, an elderly gentleman, contacted us. He had grown up with this picture that had been in his family’s possession since the 1920-ies.

We had it beautifully restored and so it became part of our Modern Art auction where it reached the sensational price of 960.000 €. 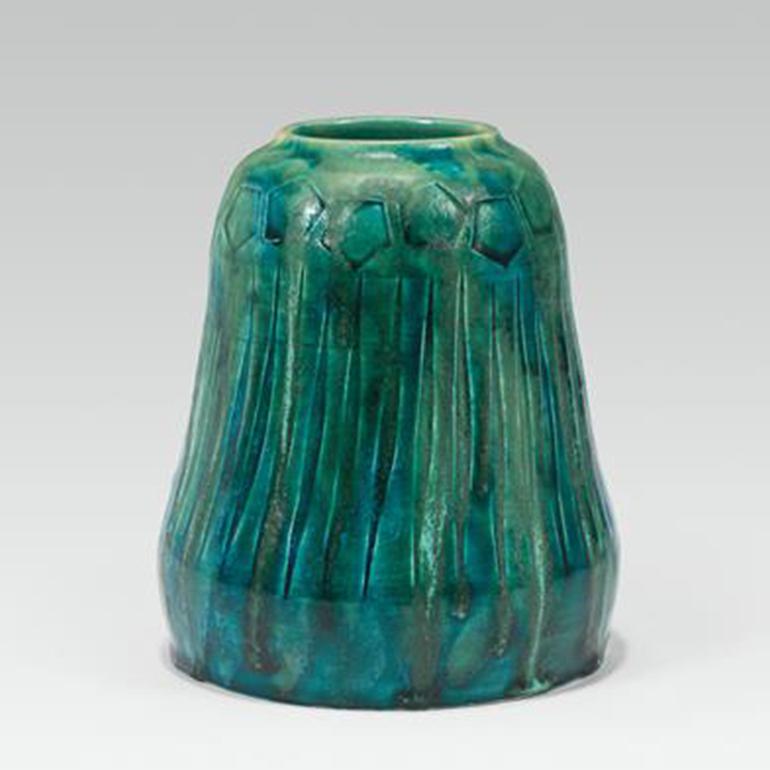 It was through a work of Koloman Moser that the imKinsky showed again its expertise in the Art Nouveau department. A very rare vase from 19000 achieved during our Christmas auction a world record price for a vase by artist with 58.800 €. This top price for an item by the famous “Vienna in 1900” artist reflects the importance of this piece, which stands for the artistic step into Modern Art. Moser worked on the vase together with his students from the School of Applied Arts in Vienna, which was a completely new way of teaching. Through the deep carved slits on the surface of the ceramic he created a three-dimensionality which was equally modern. 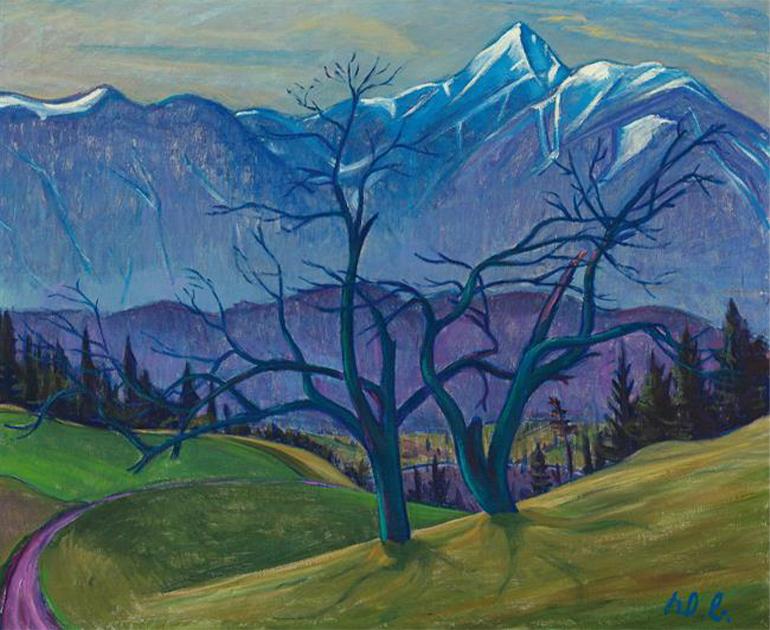 A fantastic painter that is being established more and more on the market is the Carinthian artist Werner Berg. We achieved a world record for him with his “Skittle players” from 1979 in our March auction, the painting sold for 256.000 €. In the Christmas auction, his works were very successful again. His landscape painting “Obir” (shown left) from 1960 with the repeatedly used motive of the two cherry trees, was sold for 243.000 €. Werner Berg also was the most expensive lot in our Online Bidding: one of our favorite lots form Modern Art in the June auction, his “Two women on their way home” from 1962, reached 177.000 €. 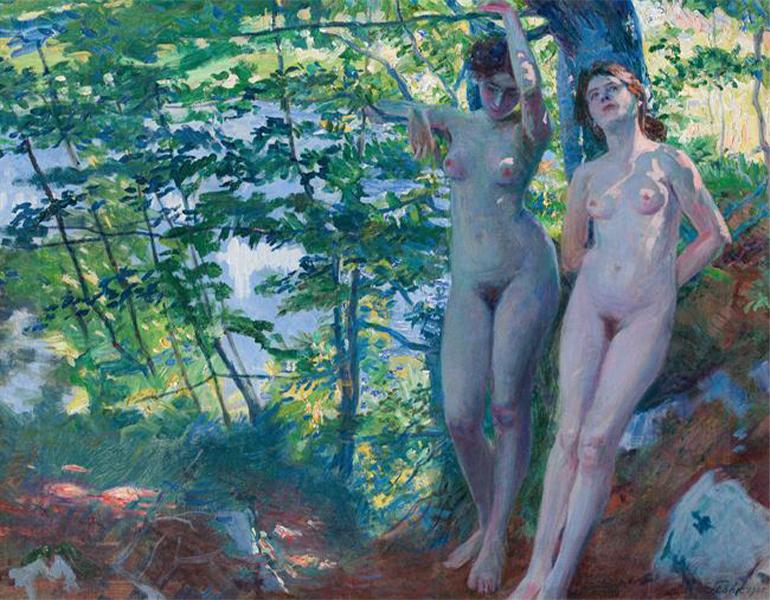 The imKinsky achieved another world record in its December auction for a painting of Ernst Stöhr, who was a co-founder of the Viennese Secession. His “Two female nudes in a beechwood” from 1905 was sold for 35.840 €. There was another record for a work on paper of the artist Arnold Clementschitsch; his “shore landscape”, executed around 1930, brought in 12.800 €. 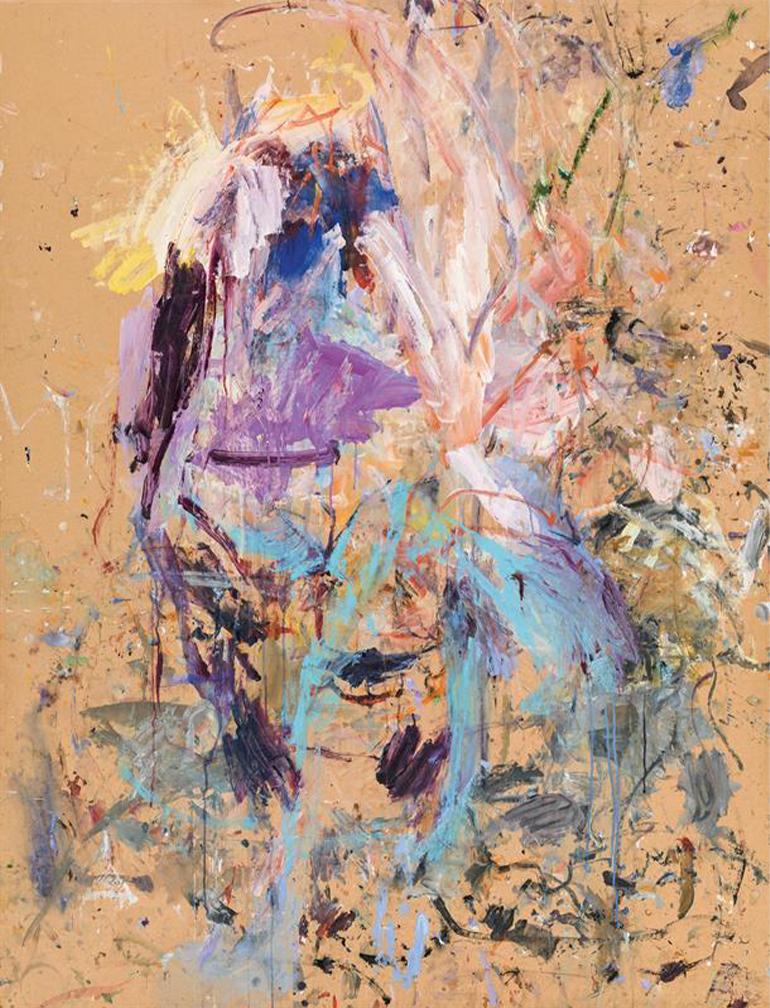 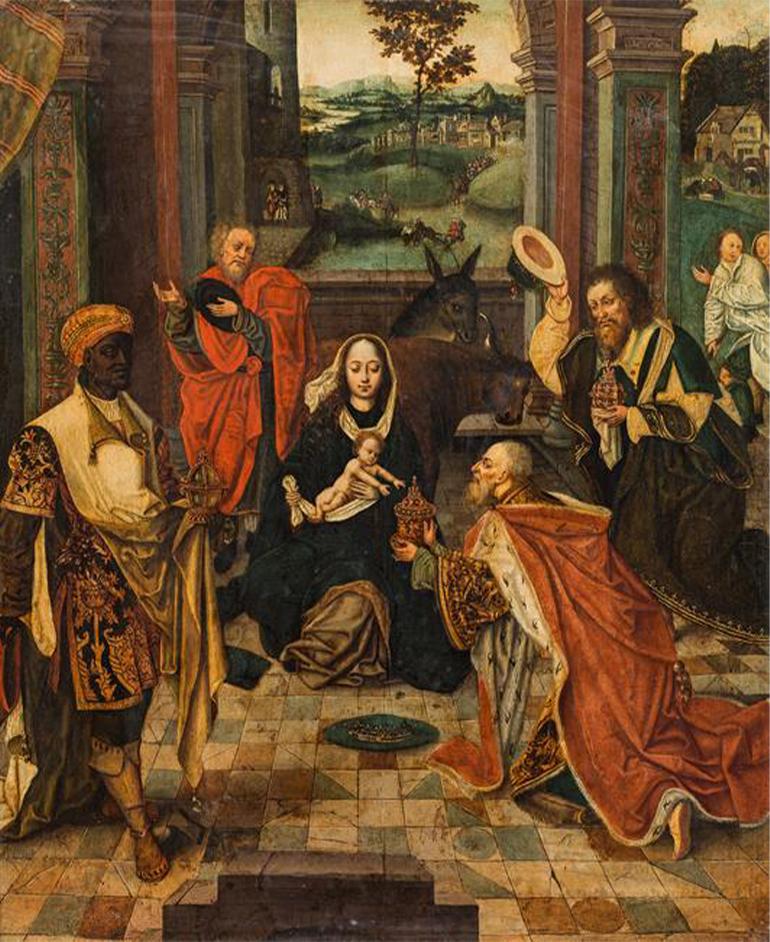 The „Adoration of the Magi“ by the Antwerp Master, which is dated around 1520, combines secular splendour and pomp with the religious in a grandiose manner. The subject, which has been popular for centuries, and the masterful execution convinced the new owner, who acquired the panel for € 71,000.

Lavinia Fontana was one of the first women to assert herself in a male-dominated environment and distinguished herself as an artist and a true exceptional talent. An early work by Fontana sold in the auction for € 64,000. 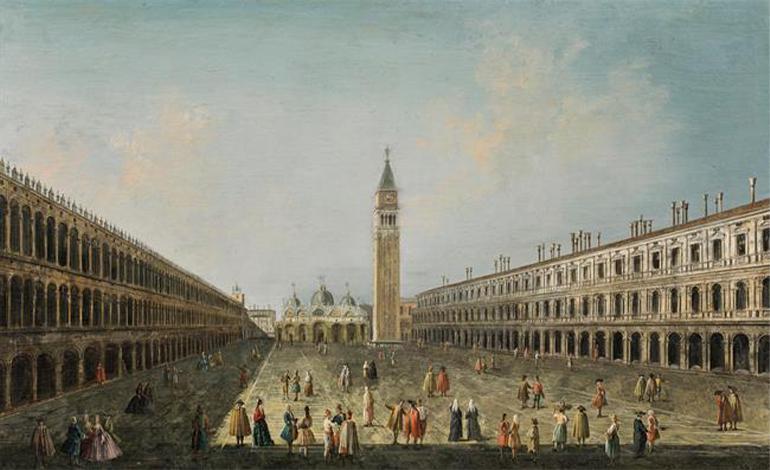 Another fine price was achieved by the representation of St. Mark’s Square in Venice from the circle of Michele Marieschi. The motif invited visitors to dream oneself into the distance and to stroll across the piazza in one’s thoughts. This skilfully executed daydream changed hands for € 53,000. 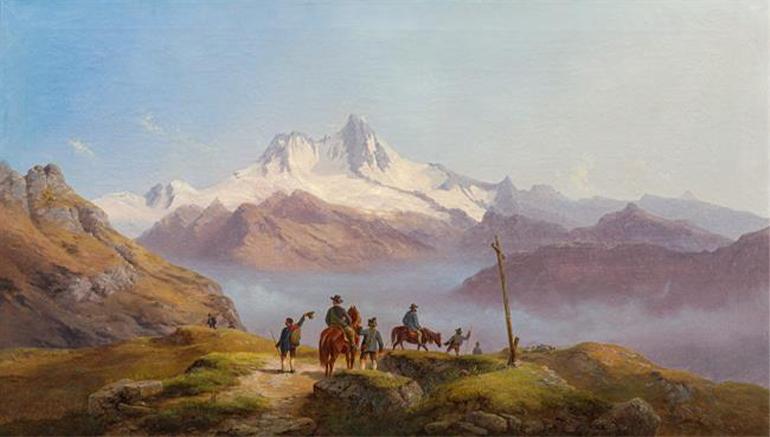 This year, two representations of the mountain Grossglockner by Markus Pernhart made hearts beat faster and won the highest prize in Austria for a representation of the Grossglockner. The work from the 134th Auction achieved € 71,000. 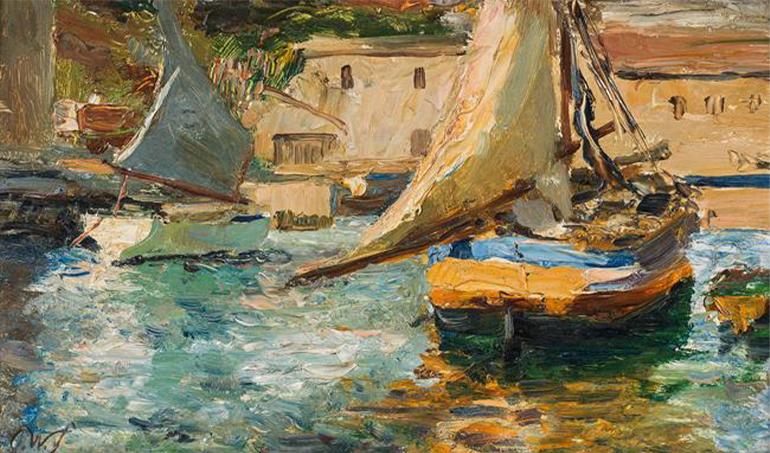 The Adriatic Sea brought Olga Wisinger-Florian to Austria to our exhibition rooms. She got to know this landscape thanks to an invitation by Archduke Josef Karl Ludwig of Austria. For an asking price of € 58,000, her enchanting painting now adorns the home of its new owner.

A particularly exciting work was “Andreas Hofer” by Albin Egger-Lienz from 1894. Here Egger-Lienz painted in the style of his model and friend Franz von Defregger, whom he admired most. The Tyrolean freedom fighter achieved a stately sale price of 167,000 €. 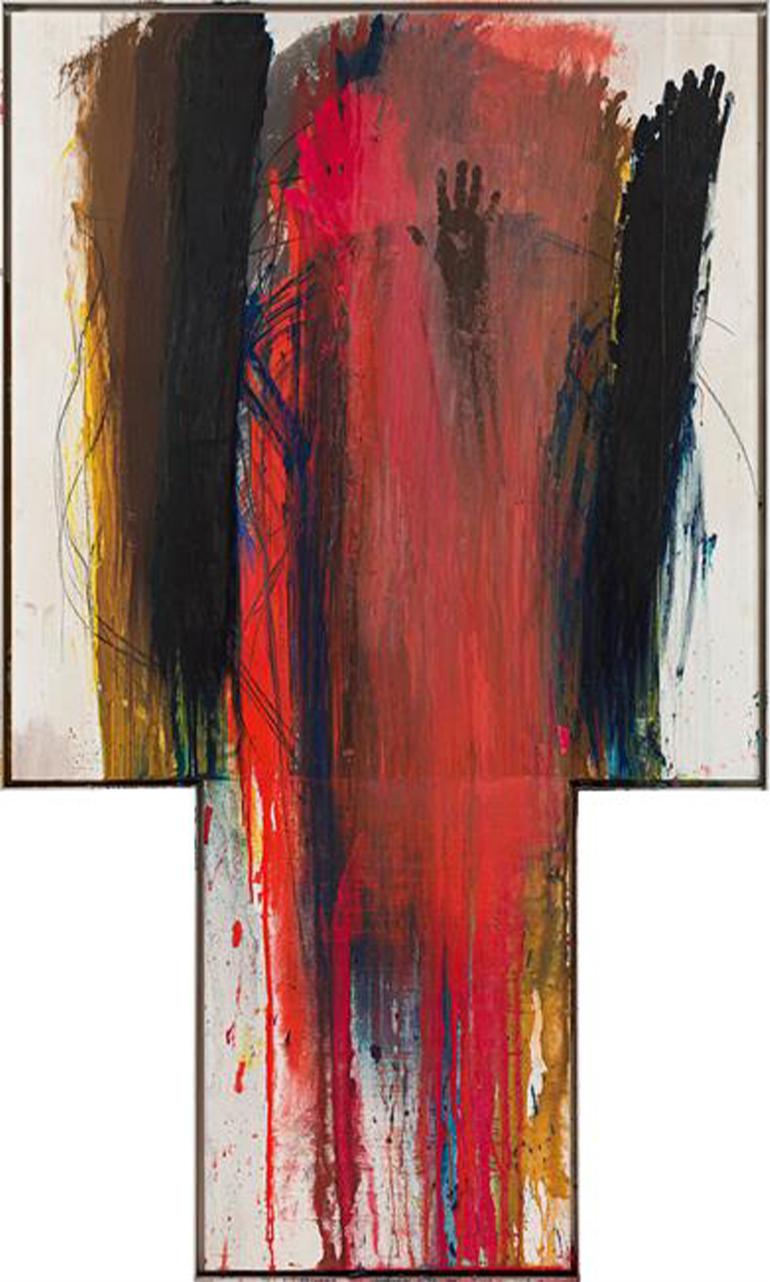 The end of 2020 brought another top result to the auction house’s Contemporary Art department. Arnulf Rainer’s “Cross” from 1987-88 was highly fought over until it reached a selling price of 262.500 €. This makes it the most expensive ever auctioned Cross Painting from Rainer. The picture is a very special one: It was part of a retrospective of the artist at the Solomon R. Guggenhiem Museum in New York – the first one ever dedicated to an Austrian painter. 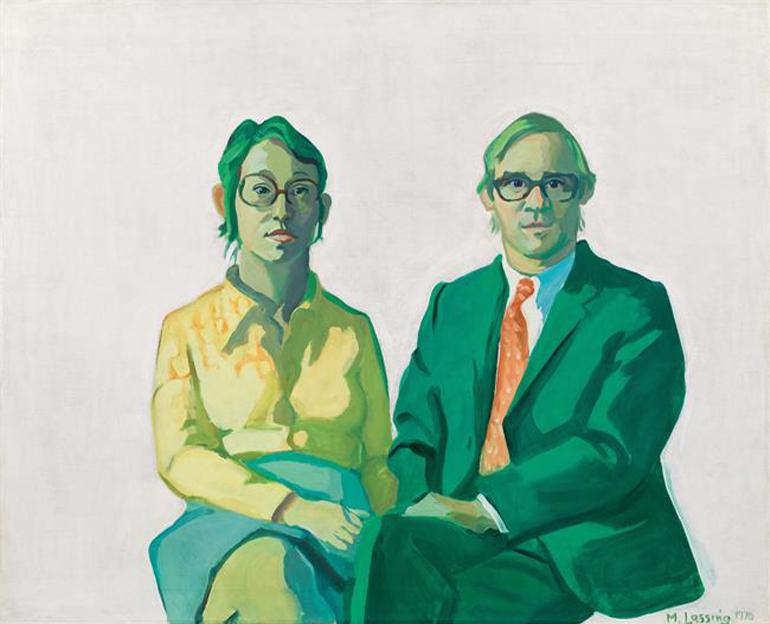 The second highest award in 2020  – 197.000 € – went to a large painting by Maria Lassnig titled “The Frank and the (female) Frankfurterin” from 1970. The Austrian lived in New York at the time, and this piece was her first portraiture commission. It depicts Maria Frankfurter and her husband Frank de Groote. The artist achieves to discreetly show their intimacy – she once claimed this painting to be one of her best works.

Another top result emerged in the Christmas Auction thanks to an Austrian Group called the “Phantanstical Realists”. The outsized painting by Wolfgang Hutter „The temples and the three girls” from 1985 achieved a selling price of 99.000 €. Hutters motive looks stagey, the scene does remind the viewer of a trip into his own fantasy. The art movement of the Phantastic Realists is definitely having more and more success in the art market. 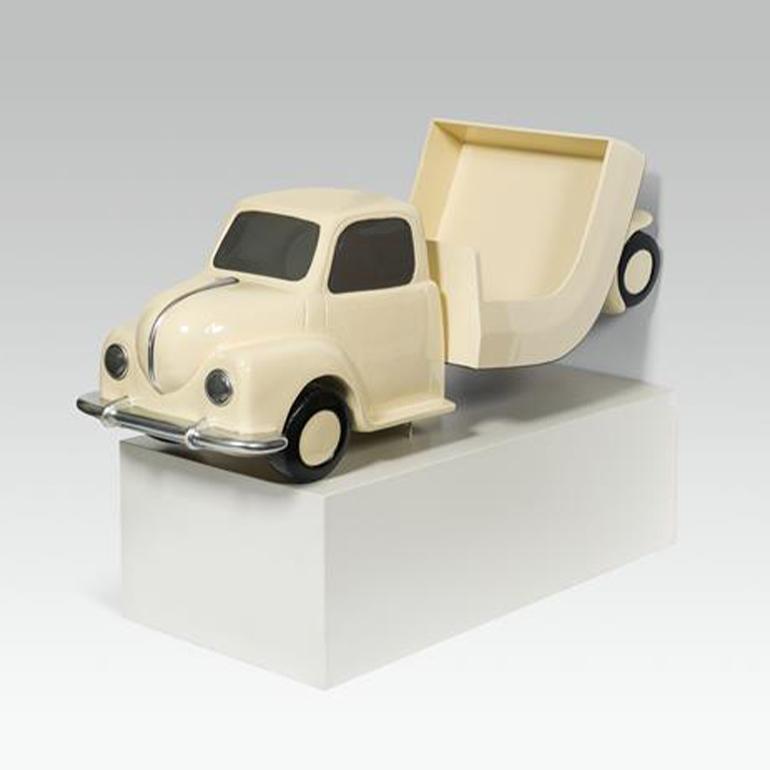 The most important increase in value in the Contemporary Art department was noted for a work by the internationally renowned Austrian artist Erwin Wurm. In the June auction, his “model for telekinetic sculpture” from 2006, a sculpture of a bended truck, was sold for 67.000 €.Wurm here does not only explore the questions on curvature of space in an ironic-philosophical way. He also deals with the mankind’s favorite “toy”. Wurms sculpture managed to quadruple its worth within five years according to past auctions. 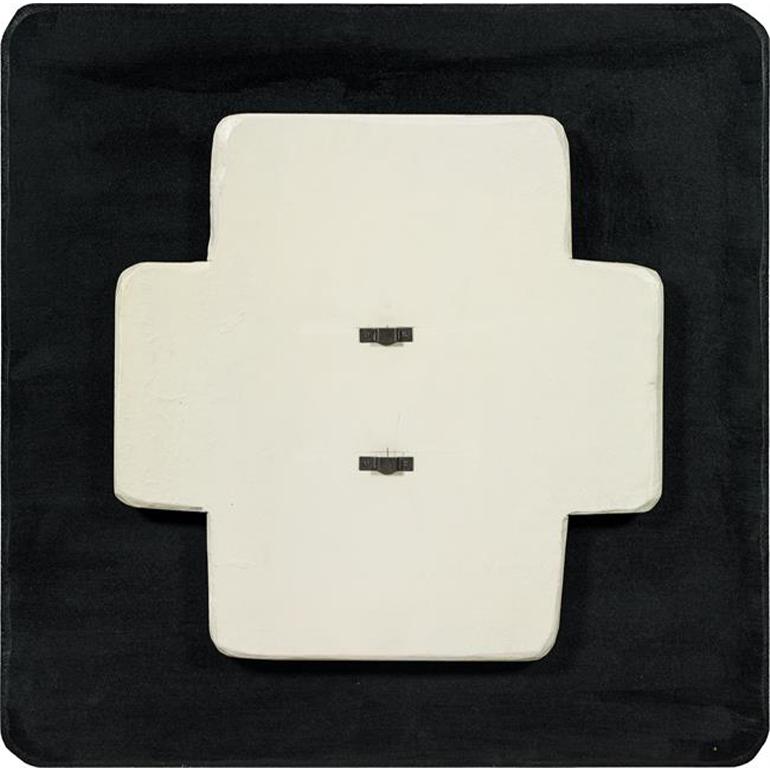 Another record in the Contemporary Art department came due to Hans Bischoffshausen. The auction house im Kinsky holds the record for works of this artist, and again managed to achieve the best result of any auction house for an artist for Bischoffshausen. In June 2020, his “White Cross on black background“ from the 1970-ies was sold for 93.000 €. The artist, who died in 1987, is not an insider tip anymore – a catalogue raisonne which is in the works right now will establish the still slightly underrated artist firmly on the art market. 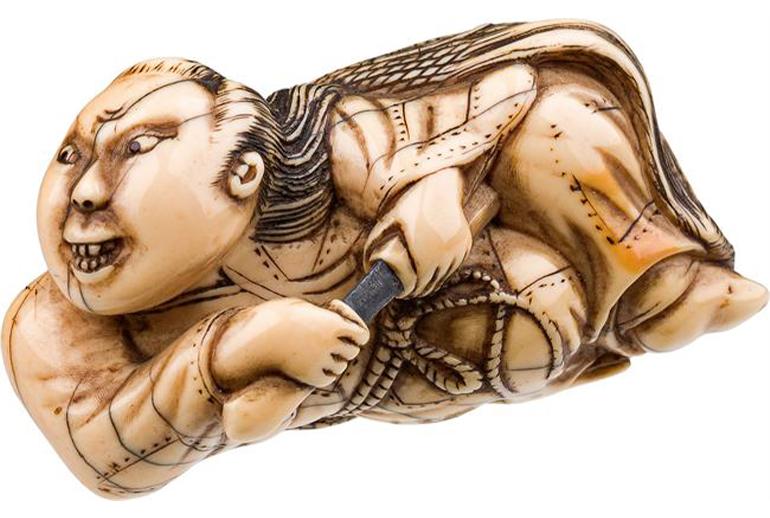 In the Antiques department, the imKinsky offered a rarity in December: a large collection of Japanese Netsukes from the early 19th century. It had been amassed over three generations and comprised 73 pieces. In total, the auction brought a result of 99.500 €. 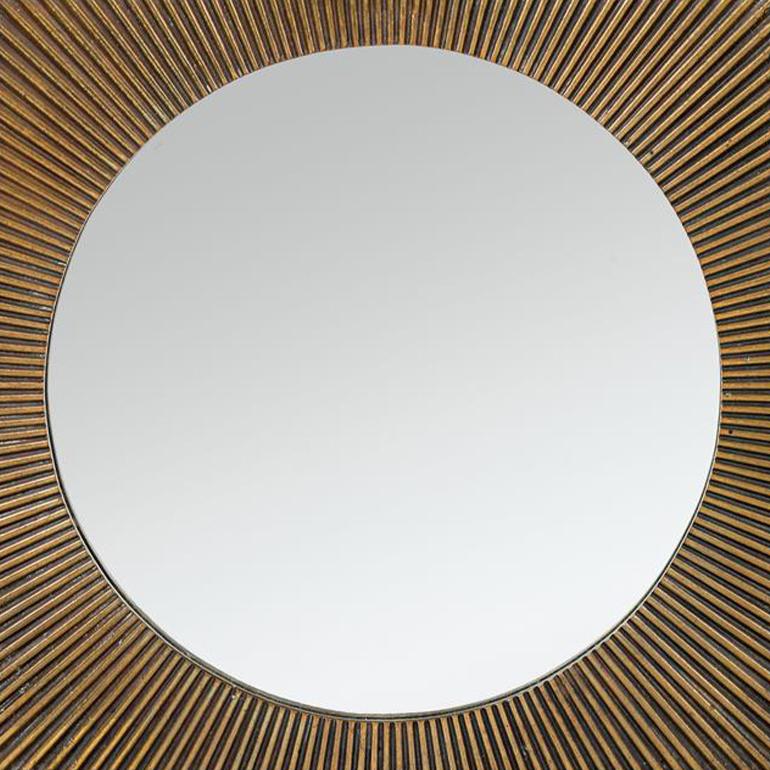 During our Christmas auction, a wonderful mirror by Franz Hagenauer form 1966 achieved a selling price of 7.424 € and therefore became the most expensive wall mirror by the artist. Another record, this time for a chandelier by Otto Prutscher was achieved during the same auction. The gilded chandelier from around 1924 sold for 28.000 €.