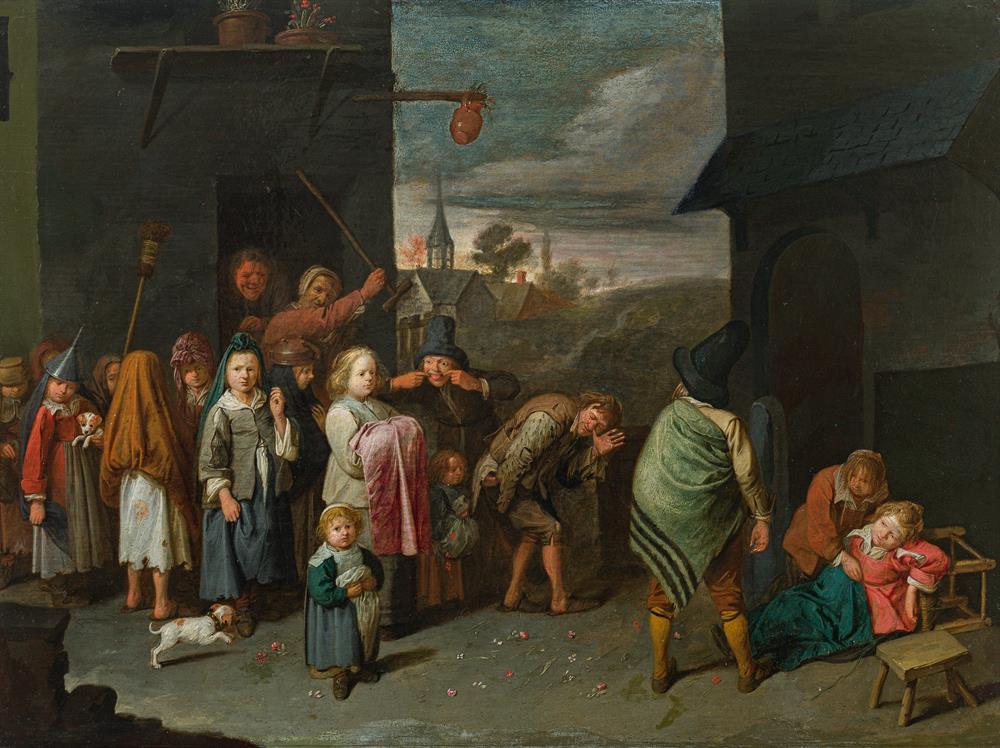 formerly in the collection of Prince Wenzel Anton Kaunitz-Rietberg (1711-1794), Vienna (his collection was sold in the 1920s in Vienna);
acquired in the 1820s by Valentin Andreas von Adamovics, royal Bavarian court counsellor, Vienna (no. 44);
1856 Alexander Ritter von Reisinger, academic painter & director of the Technical University Vienna/later Lemberg (acc. Tietze Adamovics‘ nephew);
Andreas Ritter von Reisinger, Vienna (1857 – 1936), documented in his possession at least from 1896 to 1908 (acc. Frimmel & Tietze);
until 1938/39 collection of Julius Priester (1870-1954), president of the petroleum company Galizin GmbH, Vienna (1937 documented in a black and white photograph of the apartment, see Lillie 2003, p. 905f.);
confiscated by the Gestapo;
circa 1950 acquired at the Viennese art market by the consignor’s grandfather;
since then private property, Austria

We are grateful to Fred G. Meijer for his help and confirming the painting as an autograph work of David Ryckaert III. (based on professional photographs).

This painting is offered for sale after an agreement with the heirs of the Julius Priester Collection.

The present painting has been in Austrian private property for three generations and has therefore received little attention in recent literature. In the 18th century it was, however, already part of the famous collection of Prince Wenzel Anton Kaunitz-Rietberg, counsellor of Maria Theresia and Joseph II., as well as patron for the Academy of Fine Arts, Vienna. Until the 19th century it had been documented in various well-known Viennese Collections as a work of David Ryckaert, but later its trace seems to get lost. In her 1999 publication, Bernadette van Haute lists among the unidentifiable works a painting titled "Children's Game" without illustration, which had formerly been in the Adamovics and Reisinger collections. However, Tietze had already published the painting from the Reisinger Collection in 1908 with an illustration and described it as follows: ‘a procession of girls and boys who seem to be mocking a girl in their midst; on the right, a girl on the ground being covered by an old woman with an apron.’ (translated from German). The published minimally differing measurements can probably be explained by the conversion from the original inches to centimetres.
After research brought to light the provenance of the painting, which goes back to the 18th century and thus its authorship, which was always beyond doubt, it has now also been possible to reconstruct the moving history of the painting's ownership in the 20th century. The owner documented by Tietze and Frimmel around 1900, Andreas Ritter von Reisinger, died in 1936. He appointed his wife Luise von Reisinger as universal heir, but she was denied the right to inherit (cf. Lillie p. 955ff.). However, since this painting is not listed in any of the estate or seizure lists drawn up after Reisinger's death, it must have been sold beforehand and come into the possession of Julius Priester.
His important collection was confiscated by the Gestapo from 1938 and sold or auctioned. After being forced to flee to Mexico, Julius Priester tried, largely unsuccessfully, to regain possession of the art objects seized from him until his death in 1954. After research could proof in 2020 that this work belonged to his collection, an agreement has now been reached between the consignor and the representatives of the heirs after Julius and Camilla Priester in accordance with the "Washington Principles" (1998), so that this exceptional painting can be put up for auction.

The composition of the “Charivari” is already known from another painting of the same subject in the Musée des Beaux-Arts, Lille (cf. B. van Haute, 1999, p. 92, no. A 43, ill. 43). Bernadette van Haute published this work, formerly attributed to Jan Miense Molenaer, as a painting by David Ryckaert III. The Lille painting, which is also unsigned, is however executed on canvas and not, like the present work, on wood, as is more typical for Ryckaert. In terms of subject and structure, the composition of the “Charivari” is particularly close to the monogrammed work by Ryckaert in the Städelsche Kunstinstitut, Frankfurt a. M., dated 1639, which shows a “procession of children” or the “Whitsun bride” (Haute 1999, p. 86, A29). Another autograph version of this subject was sold at the art market a few years ago and is documented in the RKD, The Hague (no. 000018068).

The present painting is particularly captivating not only for its artistic execution but also for the charm of the subject. It shows a “charivari” – also known by terms like “hullabaloo” or “ketelmuziek” – and generally means a noisy, rumbling procession through the streets. In this specific case, however, following some local traditions, it is seen as a protest procession to ridicule sexual promiscuity and, in particular, the procreation of a child out of wedlock. The carnivalesque procession can be read from left to right in this painting. The left half of the picture shows imaginatively dressed children. They follow the main figure, who is holding a child carefully wrapped in cloths and who is ironically accompanied by two children strewing flowers. To her right, a juggler grimaces with his tongue, while a figure in tattered clothes, probably the village jester, exposes his buttocks. In this painting, David Ryckaert uses all his artistic ingenuity to place a popular custom on a higher moralising level. It is exhilarating, admonishing and thus stimulating conversation among his patrons at the time – the aim behind such cabinet pieces.