Six departments, one auction and many highlights 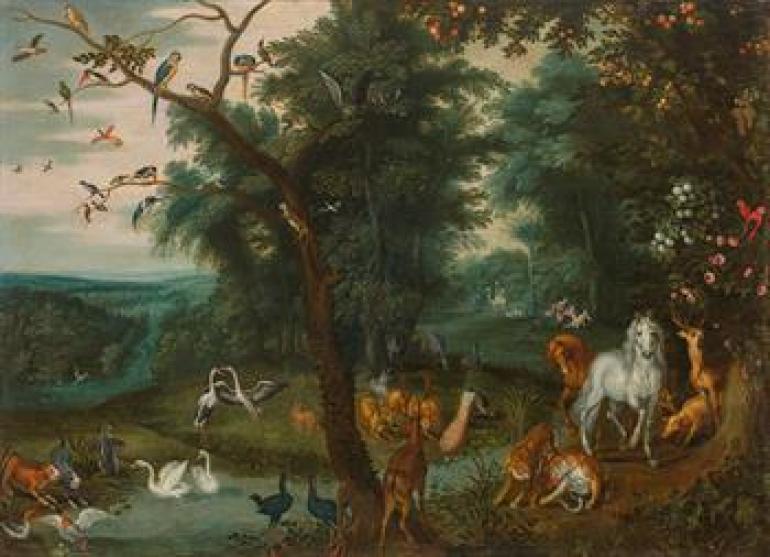 Exotic depictions and paradise landscapes enjoyed great popularity at the beginning of the 17th century, and Jan Brueghel the Elder (1568-1625) and his son Jan Brueghel the Younger also took up the subject.  This shows the curiosity and the burgeoning interest in the species richness of nature.

The present paradise landscape impresses with the variety of different animals and the coloring typical of Jan Brueghel the Younger – brown-green for foreground and middle ground and blue for the background. In a wooded landscape there are native animals as well as the white "paradise horse" dominating the right half of the picture. Exotic representatives of the animal world are mainly the penguin on the left, the colorful birds in the tree as well as camels, elephants, lions and leopards.  Regardless of their original habitat, the artist gathers the different animals in his painting and creates a work that fascinates with its vivid details and exotic character. 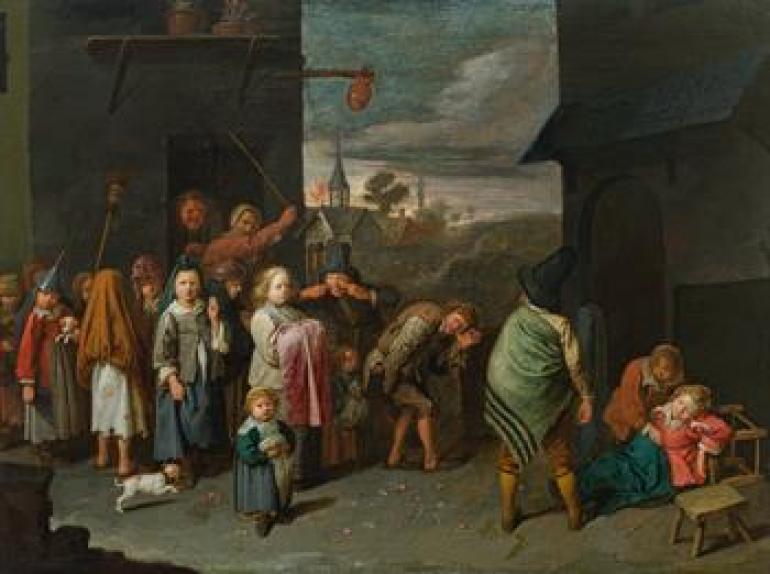 In addition to the artistic execution, the present painting impresses with its appeal. It depicts a 'Charivari' – also known by terms such as 'Hullabaloo' or 'Ketelmuziek' – and generally means a noisy, rumbling procession through the streets. In the specific case, however, following some local traditions, it is seen as a protest procession to deride sexual freedom of movement and, in particular, the procreation of an illegitimate child. In this painting, David Ryckaert uses all his artistic ingenuity to place a popular custom on a higher moralizing level. 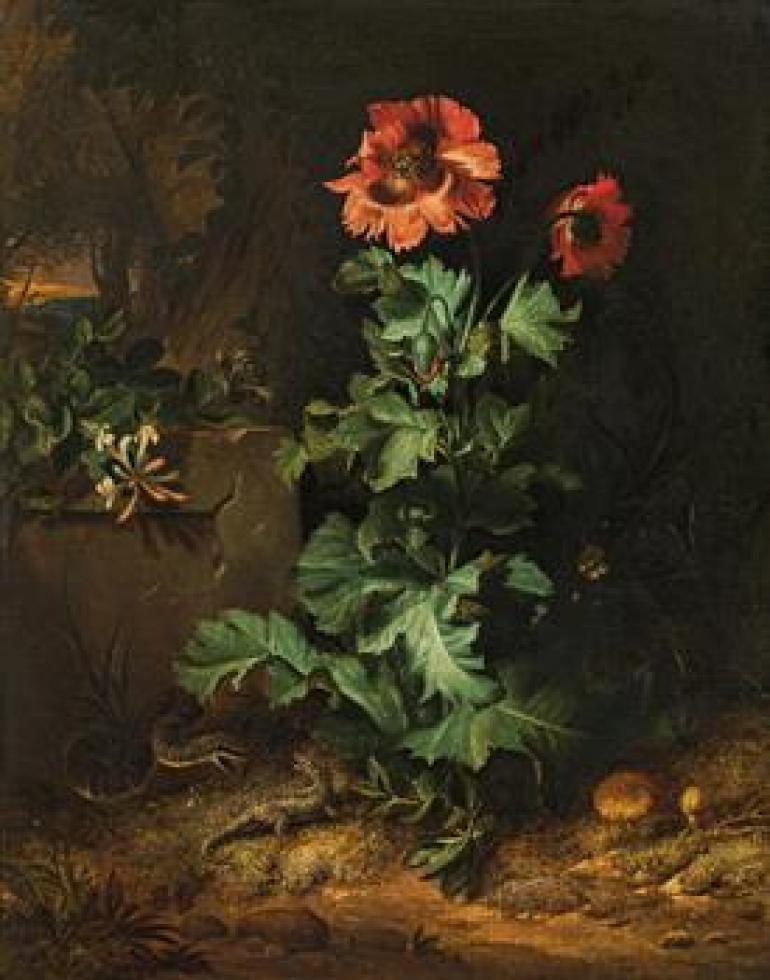 Otto Marseus van Schrieck is regarded as a central source of ideas for the development of the so-called "Sottobosco", a subcategory within Dutch still life painting in the 2nd half of the 17th century.

In the foreground, the poppy plant is staged with the help of an almost spotlight-like light source. The brightly lit poppy blossoms stand in contrasting chiaroscuro the mushroom-covered soil. In the background, dark brown and green tones also dominate. Schrieck creates a successful atmosphere in the microcosm of the forest floor through this characteristic lighting and colouring.

Variants of this composition can be found at the Museum of Fine Arts in Boston at the Metropolitan Museum of Art, New York. 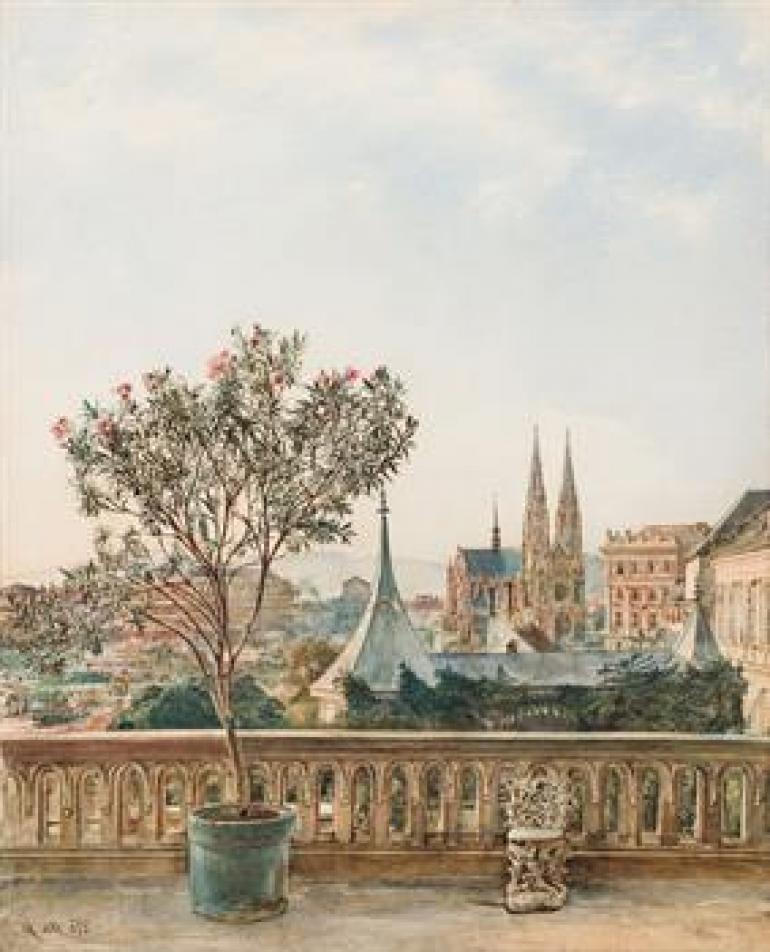 Rudolf von Alt
View from the Basteipavillion in front of the Stadtpalais Liechtenstein to the Votivkirche in Vienna, 1873
Watercolour on paper 52 x 42 cm
Estimate price: 40 000 - 80 000 €

Rudolf von Alt also grew up as the son of a painter. With his brother Franz he learned in the workshop of his father Jakob and was already entrusted with artistically responsible tasks in his youth. Early on he became known beyond the borders of his homeland and was also very successful during his lifetime, which culminated in his elevation to nobility. Since father and son usually worked very closely together, individual works can often only be distinguished by connoisseurs. Subjects of his mostly small-format creations are city vedates, landscape and architectural representations, including about 100 times the St. Stephen's Cathedral in Vienna. He was an outstanding watercolourist who masterfully knew how to give the static views a special dynamic. 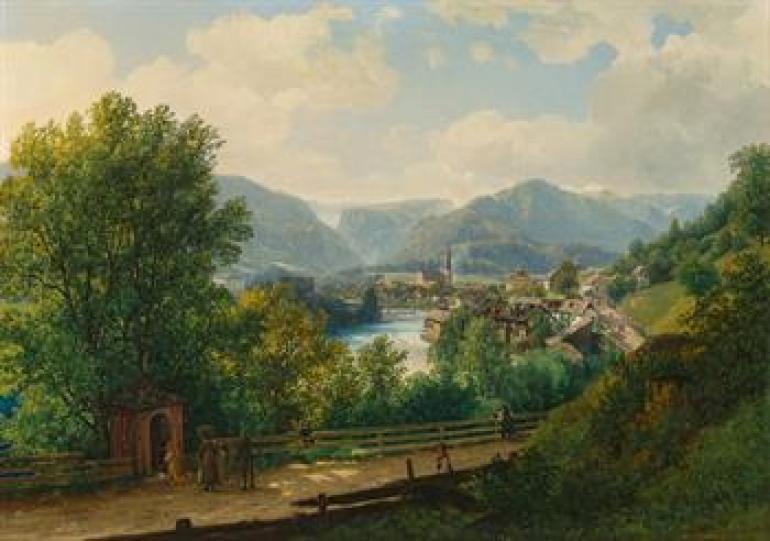 The twin brothers Thomas and Johann Nepomuk Ender were born in Vienna in 1793. Already at the age of 13, both entered the Vienna Academy of Fine Arts. Thomas Ender soon gained recognition for his "landscape drawings" in the form of prizes and scholarships.

One of his first patrons was Prince Metternich, who in 1824 called him to Ischl, where the court spent the summer holidays. The Salzkammergut offered him numerous motifs.

It is possible that our painting was also created soon after Ender's stay in Ischl. In the Belvedere in Vienna there is a small oil study "Gegend bei Ischl", dated around 1828, which could have served as a preliminary study of our large-format work. The present work is a wonderful example of how committed Ender was to a painterly realism, as he topographically describes exactly the surroundings of Ischl on a bright, friendly summer day. 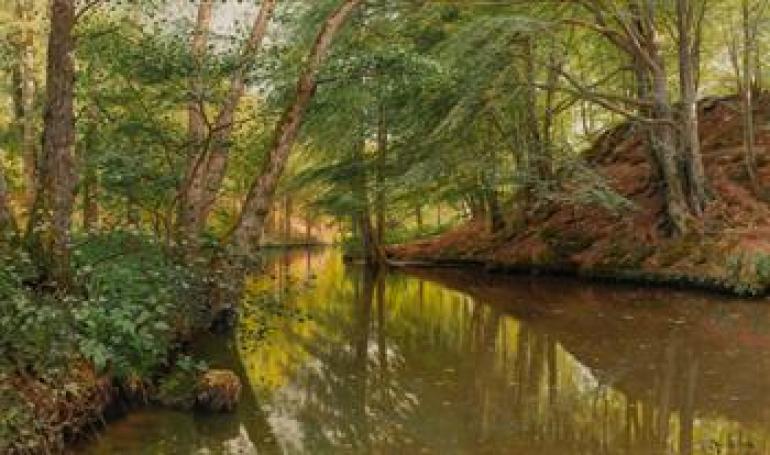 Peder Mønsted, born in Greena, East Jutland in 1859, impressed by the atmospheric, almost dream-lost atmosphere he gave his landscapes. To this day, he is one of the most popular Danish landscape painters of the late 19th century.

In the present picture, Mønsted stages the stream as a prominent element, which he very close-sightedly puts in the foreground of his forest representation. Through this choice of perspective, he creates an immediacy for the viewer, who is thus integrated into the representation. In the near-sighted areas of his composition, his mastery is particularly evident: the representations of water, leaves and tree barks show an almost photographic realism regarding their textures due to the brushwork. 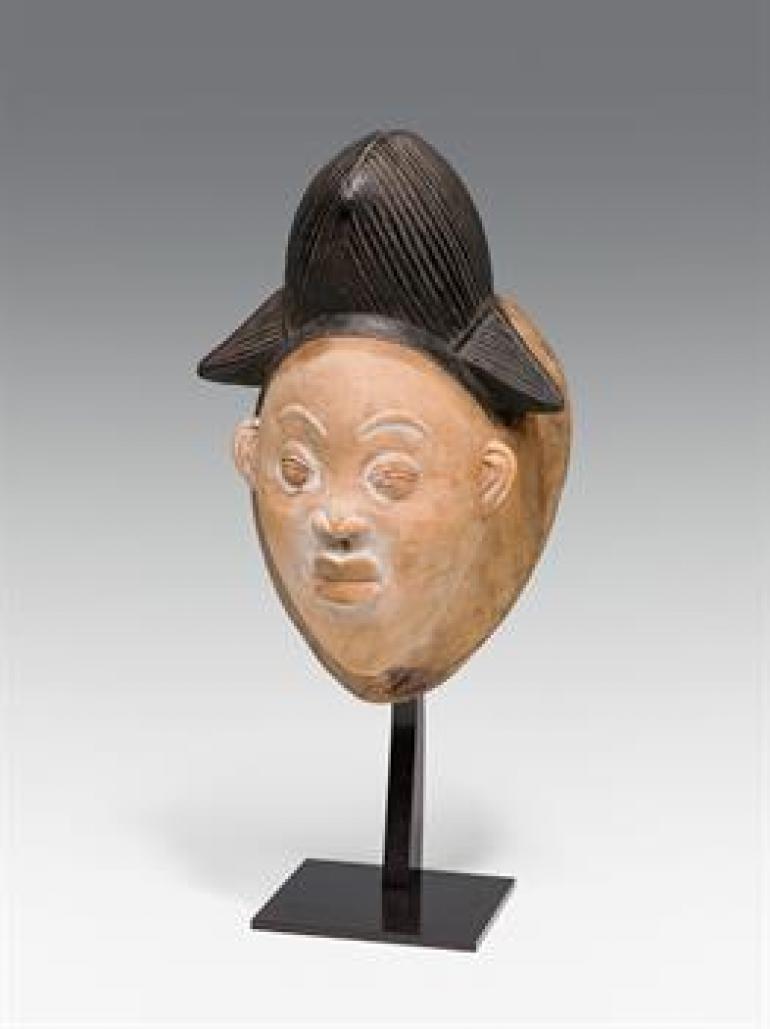 These objects from the collection of an Austrian connoisseur originated in Africa. They were all used by African tribes as part of a cult and only given away when their "effectiveness" diminished. Regular use resulted in their unmistakable patina and strong radiance. In terms of aesthetics, the works of art are comparable to those of classical French modernism; Derain, Picasso, Braque or Giacometti were inspired by such masks.

For music lovers, there is a rarity to be bet on: a bronze bust of Herbert von Karajan designed by Milos Borc; another bust is in the Vienna State Opera. 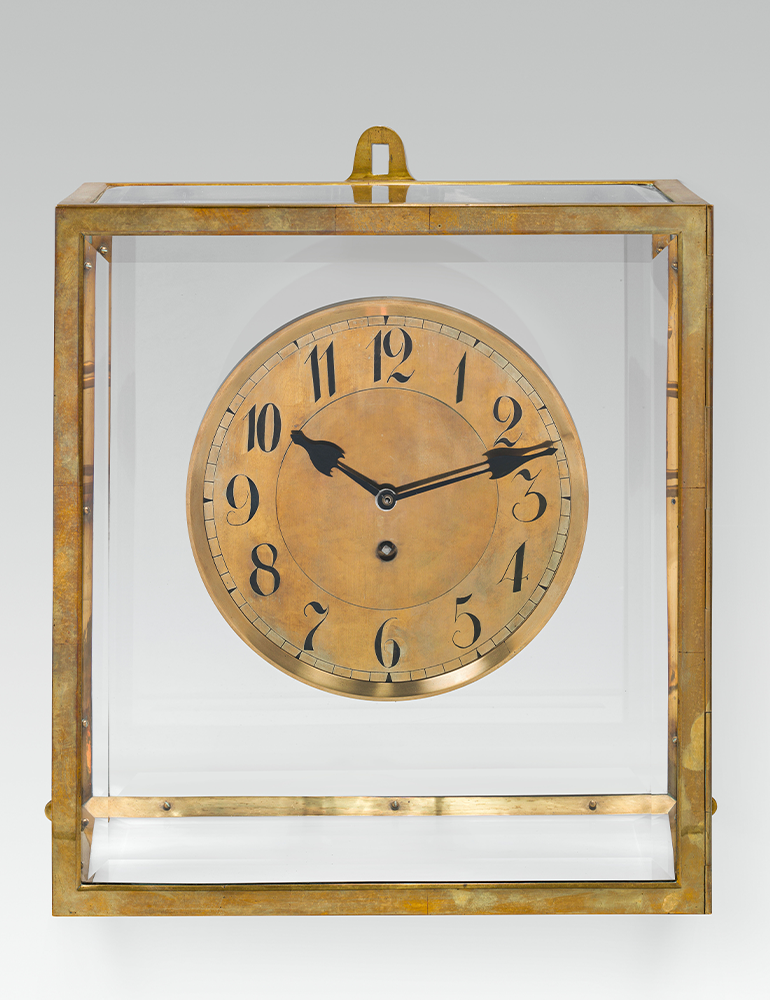 As usual, imKinsky is strong in the areas of Art Nouveau & Design and Classical Modernism, impressing with a wall clock designed by Adolf Loos. This fully functional watch in a glass case is a wonderful example of the architect's design language. He was an opponent of the idea of the Vienna Secession, according to which art is also there to beautify everyday life: in his opinion, everyday objects should not be artistically designed. In doing so, he set himself apart from the Wiener Werkstätte, which can be clearly seen in this watch – its simple, unadorned forms correspond entirely to his principles of "form follows function". For Loos, ornaments were "crimes", as he propagated it in a paper of the same name in 1910. 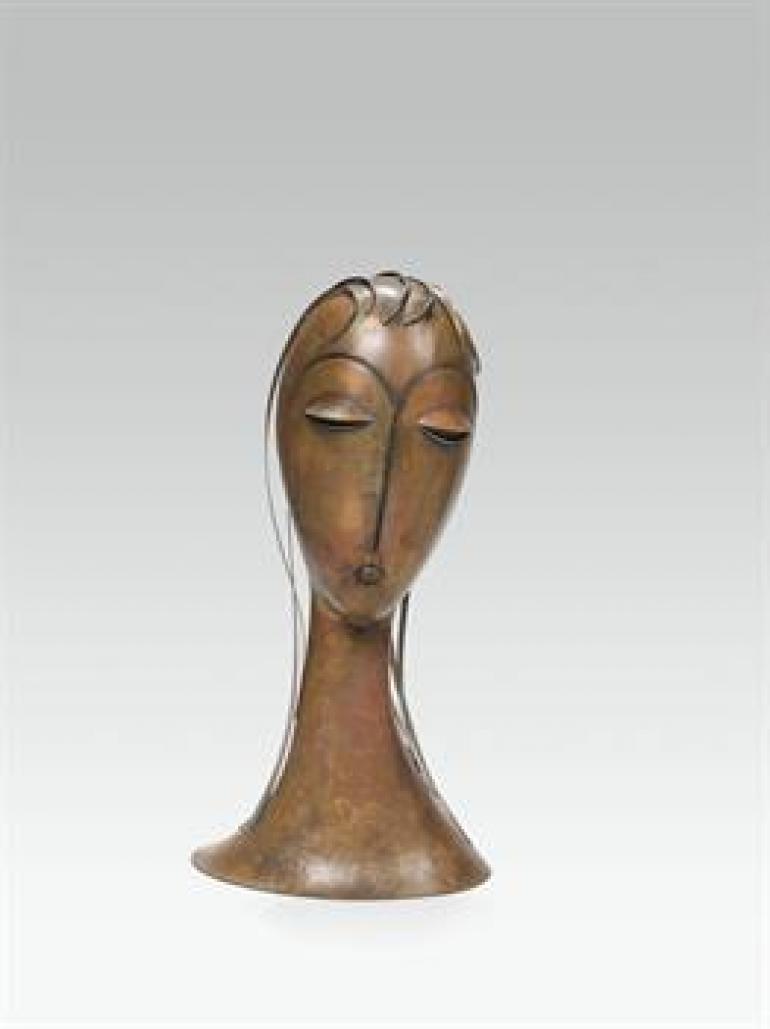 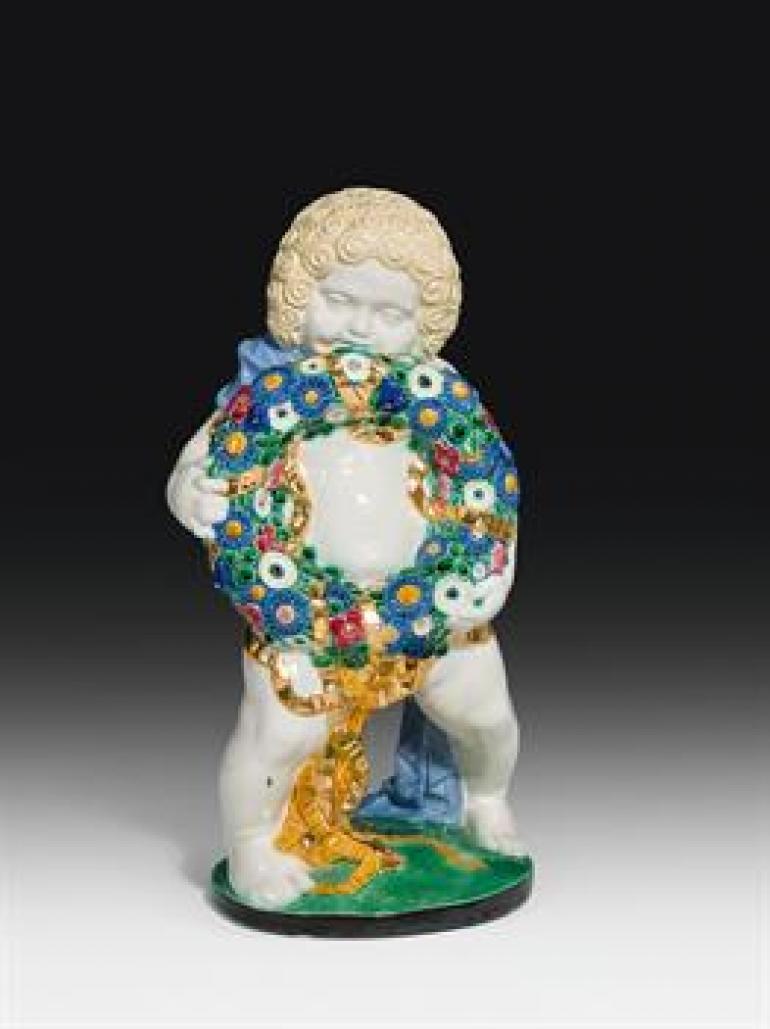 You too can sell your works of art and objects  successfully.
Benefit from our advice - we look forward to your consignment! 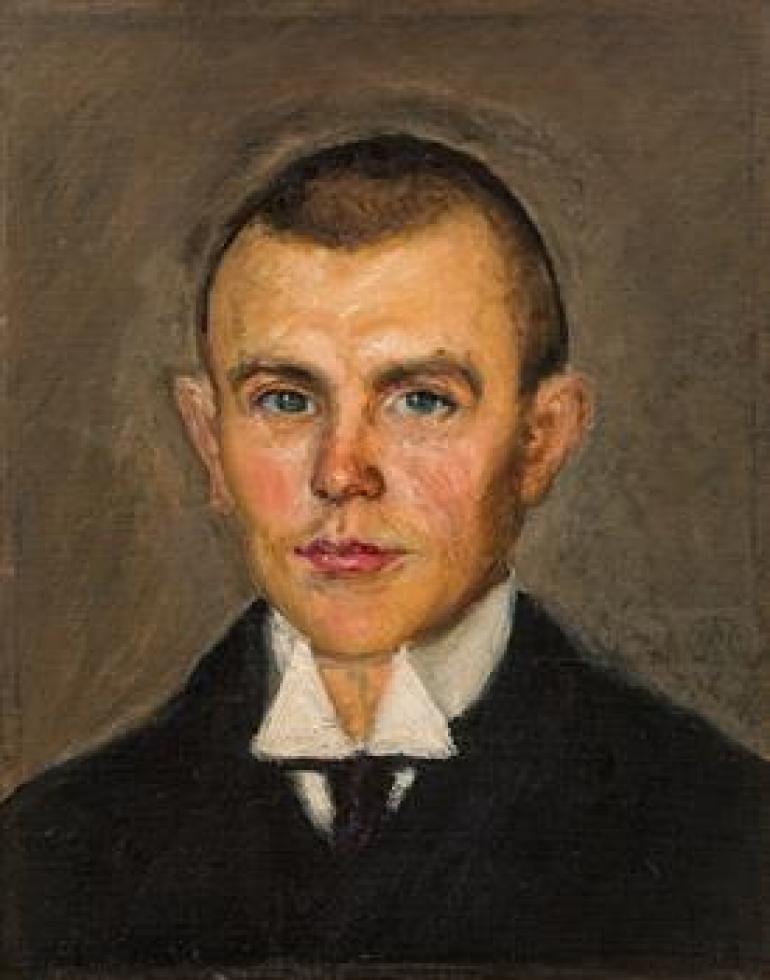 An absolute highlight in this category is a portrait of Richard Gerstl by Waldemar Unger. Unger was a childhood friend of Gerstl, of whom the painter made two portraits. These remained in Waldemar Unger's possession until his death in April 1961 and came by inheritance to his daughter. Probably around 1963, the present "Portrait of Waldemar Unger II" was acquired by Rudolf Leopold, after which it came into the collection of Otto Breicha. Since 1975, the painting has been in Italian private ownership and has been shown at important exhibitions on Richard Gerstl, most recently at the major retrospective at the Schirn Kunsthalle in Frankfurt. 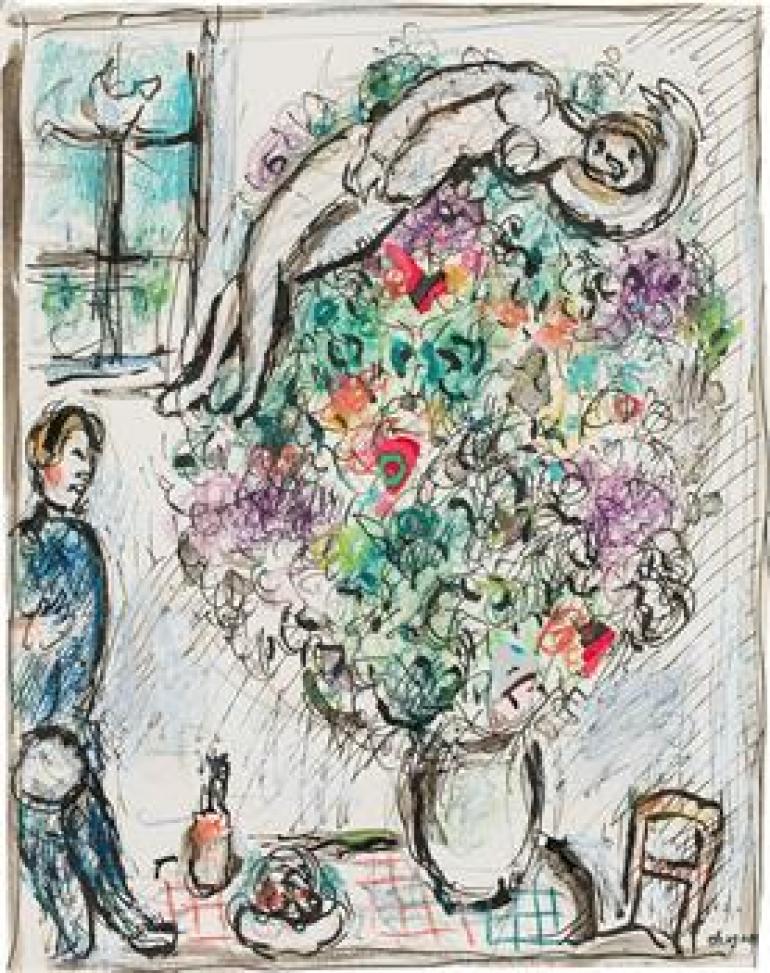 In the work entitled "Le nu sur le bouquet", executed in 1978, Chagall makes use of the two pictorial themes that play an essential and recurring role in his oeuvre: the lovers and a magnificent bouquet of flowers.

In this enchanting scene, the lush bouquet of flowers in the vase that stands on the table occupies the pictorial space dominantly and centrally. The woman is bedded on the splendor of flowers.

With ink, the artist creates a lively jumble of densely spaced flowers in a bouquet of flowers and creates clear contours of the figures. Especially in his late work Marc Chagall's masterful handling of color is clear. The floral motifs offer Chagall a beautiful opportunity to model tonal values with a lot of feeling and to produce harmonious color contrasts. 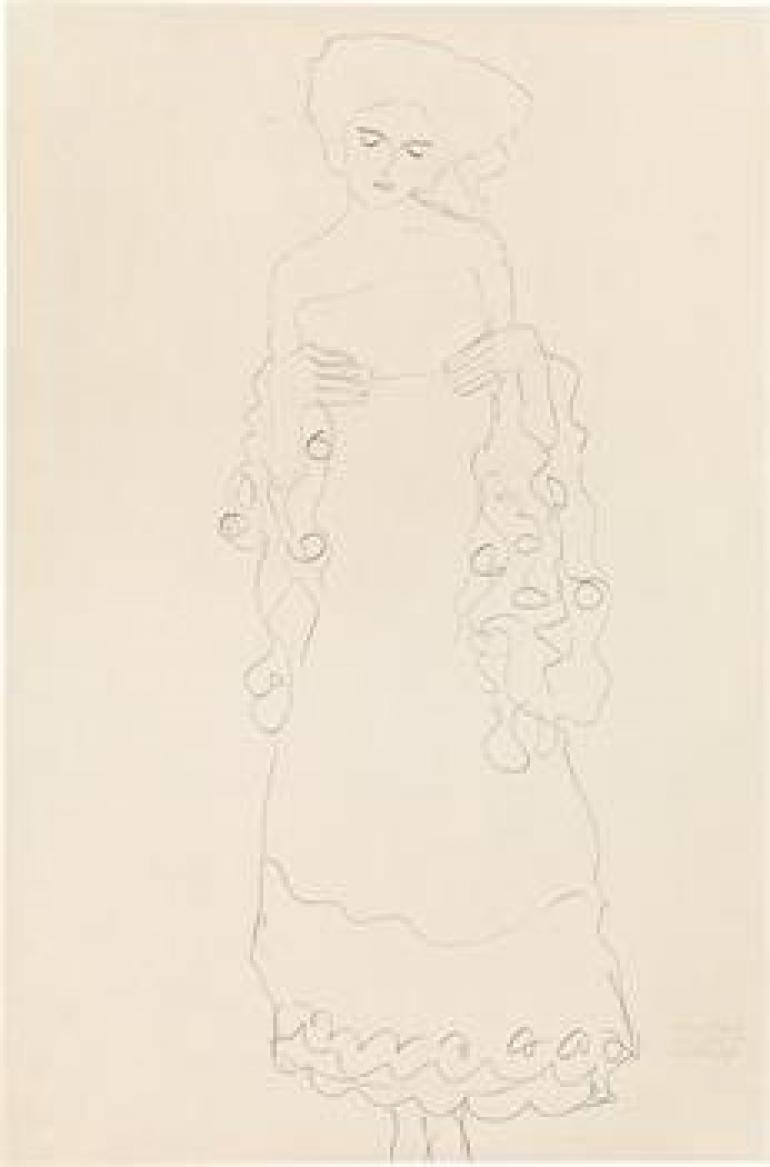 The sheet shown here belongs to an outstanding series of reading and singing women, which were created around 1907 roughly parallel to a large group of striking nude figures. These heroic female profile figures seem to strive towards an invisible goal, while the frontally depicted singers and readers seem to rest completely in themselves, with which Klimt refers to the inner elevation of humanity through the arts.

Spirituality and monumentality form a unique connection. With simple, unerring pencil lines, Klimt outlines the flat projected layers of space of the geometric hands, the rectangular sheet of paper, the vividly patterned cape, the simple, long dress and the bare shoulder area. The lack of gravitas of the columnar frontal figure, whose feet are overlapped by the lower edge of the paper, underlines the solemn mood of this work, which Klimt created in one of the most inspired phases of his art of drawing. 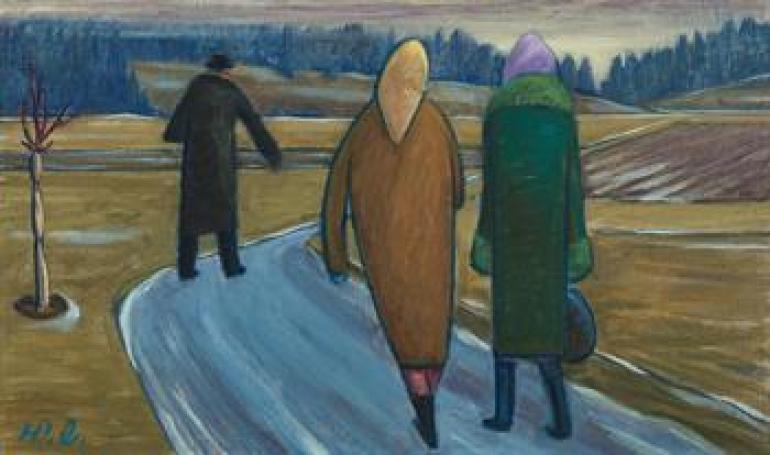 According to his own statements, there is "no harder, more unsentimental reality than country life. It is nevertheless able to sharpen the feeling and awareness of the spiritual decisions and events of the time."

Werner Berg himself lived a simple, barren life on the Rutarhof in Carinthia, where he moved in the 1930s. There he observed the rural population in their hardship of everyday life. This picture shows walkers turning their backs on the viewer – their aversion corresponds to the frosty landscape and the withdrawn colours. The artist creates a melancholic mood that is typical of his late works. 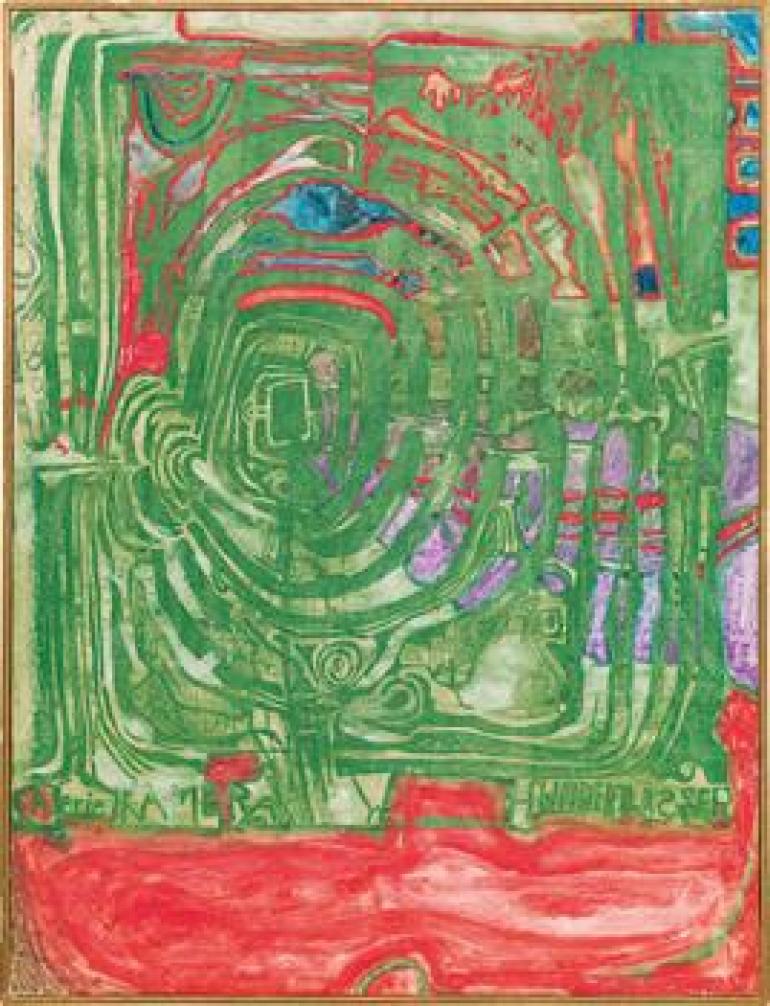 In his very own pictorial iconography, the spiral, often in a labyrinth-like form, plays a central role. It is to him "symbol of life and death", a symbol of our way through the world. Also in "Galerie Kamer - Frischgefundenes Labyrinth" we can observe this phenomenon. Against a decoratively designed red and blue background lies a dense green network of aberrations, which, starting from a rectangular outline towards the middle, condenses more and more into a spiraloid shape. One comes across insurmountable walls and reach bulges that are filled like bubbles with the color of the subsoil. The first part of the picture title refers to the Hélène Kamer Gallery, the Parisian gallery of Friedensreich Hundertwasser. Linking a place with a poetic title is typical of the artist who knows how to create his very own reality. 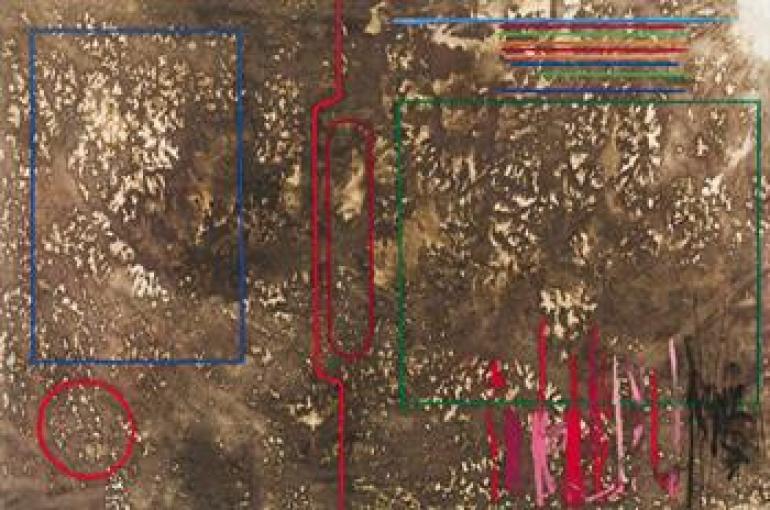 In 1984, the award of the Austrian Art Prize for Fine Arts marked a turning point in the public recognition of Hermann Nitsch. This picture was executed the same year. Blood as the juice of life, as a symbol of incarnation, love, passion and death is an important element and is not only used as a painting color in the bulk paintings of the Orgien Mysterien Theater by the artist. Here, with its brown tone typical of the dried state, it forms the background for a lineament of colorful lines that form geometric shapes such as rectangle, oval and circle, or run parallel to each other in short strokes. At the bottom right of the picture, Nitsch has left the desire for strict geometry in pink and red tones, here the set stripes spill out into the slightly expressive and no longer seem to want to adhere to the given rules. This also refers to the enormous expressiveness of the image's background, which is in incredible contrast to the colorful geometry in the foreground. Here the duality of order and chaos is symbolized, which also surrounds us in the real world. 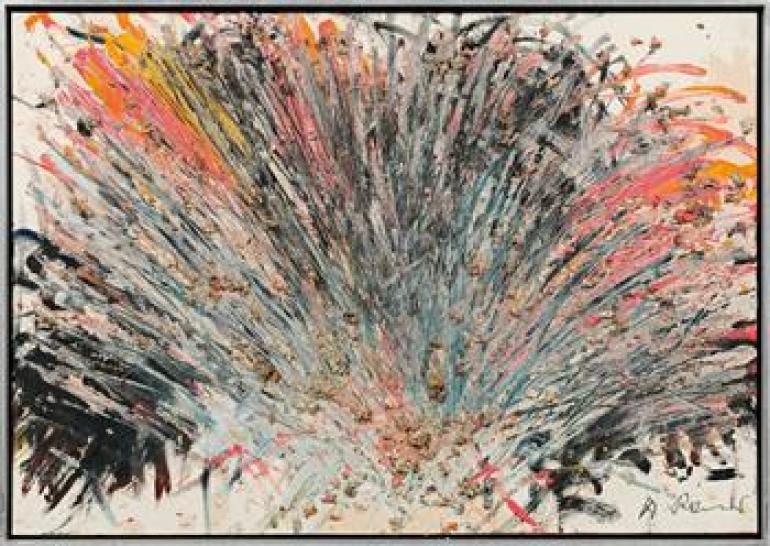 Arnulf Rainer's finger paintings are explosions of color and gesture. One feels the physical exertion that controls the process. Starting with chaotic black gestures, over red and yellow strikes, the visual language of the present work condenses more and more into a close-meshed, fan-shaped bundle of lines. The impulsivity increases layer by layer. The fine iridescent colorfulness is reminiscent of the fluffed-up tail plumage of a bird or a precious feather crown. An association that Arnulf Rainer reinforces in his title "Eitler Vogel" – Vain Bird.

The first finger paintings were created around 1975 out of necessity: it was a broken brush that Rainer had to replace spontaneously.