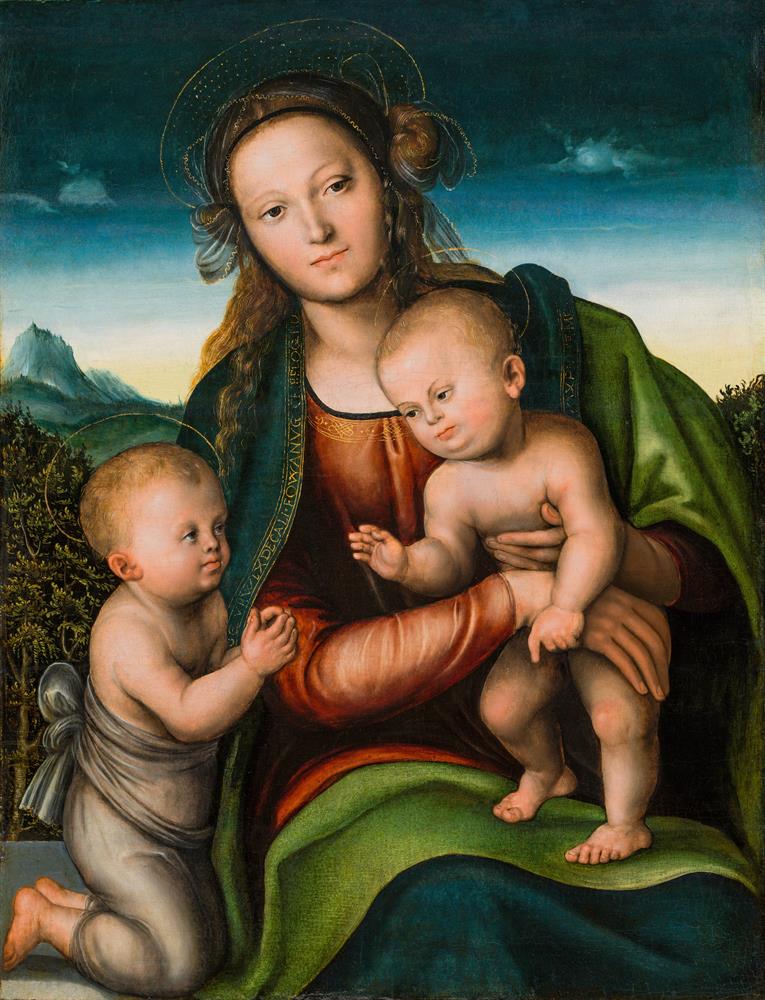 by inheritance to the present owner; according to his bequeather the painting has been in family property since at least 1920

This Madonna by Lucas Cranach the Elder, previously unpublished and only recently rediscovered in an Austrian private collection, can be dated around 1512. Its composition coincides almost perfectly with a work that was exhibited in Frankfurt and London in 2007/2008 (cf. Bodo Brinkmann (ed.), Cranach der Ältere (Catalogue of exhibitions, Städel Museum, Frankfurt am Main 2007/2008; Royal Academy of Arts, London 2008), Ostfildern 2007, p. 146, Cat No 17). Judging from its superior execution, Dr. Dieter Koepplin and Prof. Dr. Gunnar Heydenreich assume that „our“ painting originated before the painting shown in 2007/2008, and consider it as a possible prototype. Also the underdrawings, visible on the infrared image, correspond to the characteristic hand of Lucas Cranach the Elder and confirm this presumption.
Considering the typical workshop practice of the period and small details in the painting, Prof. Dr. Gunnar Heydenreich does not exclude that a workshop employee has participated in the execution, but he assumes the finishing by the master himself. The dating is also confirmed by the examination of the wood panel. For most of his paintings between 1505 and 1512, Lucas Cranach the Elder employed the same carpenter (probably Michael Tischer) who glued the single boards in the direction of the shorter edge, regardless of whether the panel was painted in portrait or landscape format. Since limewood panels dated after 1512 have mostly been glued in a different way, we may assume that Lucas Cranach the Elder commissioned another carpenter after he moved his studio from Wittenberg Castle into the town. The present painting shows a horizontal structure of the panel, so Prof. Dr. Gunnar Heydenreich suggests a time of origin before or around 1512.

In the wide-ranging oeuvre of Lucas Cranach the Elder, depictions of the Virgin Mary occupy a prominent position. While they do feature the most diverse artistic and geographic influences as well as quite some variety in terms of composition, they are invariably possessed of a character that is unmistakably Cranach’s. Both the choice of figures here—consisting of Mary, the Christ child, and the infant St. John the Baptist—and the painting’s overall composition betray a close kinship with Italian output from the late 15th and early 16th centuries. While there does exist documentation of a 1508 trip by Cranach to the Netherlands, the impressions from which are reflected in numerous works, it is to this day a matter of speculation whether the artist ever actually spent time in Italy or simply knew the Italian Renaissance masters from works imported to the North.
Expert Prof. Gunnar Heydenreich writes that without a doubt, the composition of the present painting—alongside that of Venus (1509) and the so-called Galluzzo Madonna (ca. 1514) document in a particularly impressive way how Cranach was thoroughly familiar with and adapted works by his Italian contemporaries. It is possible that Cranach took his inspiration directly from a painting acquired by the court in Wittenberg. Cranach’s patron, Frederick III of Saxony, had already signalled his interest in works by Italian painters in a letter written to the Duke of Mantua in 1507. Furthermore, the possibility cannot be excluded that the unknown commissioner of this painting had requested a Madonna done in the Italian manner. There is no proof for the speculation that Cranach might have travelled to Italy during these productive years. But it does seem thinkable that a wandering journeyman may have contributed new pictorial ideas to the Wittenberg workshop at which Cranach employed numerous helpers (see examination report of Prof. Gunnar Heydenreich, 4 February 2018, and Gunnar Heydenreich, “Madonna col Bambino e san Giovannino”, 1514, in: Galleria degli Uffizi (ed.), I volti della riforma. Lutero e Cranach nelle collezioni medicee (exh. cat., Le Gallerie degli Uffizi, Firenze 2017/2018), Florence 2017, p. 92).

The present painting is an outstanding example of Cranach’s interest in Italian art and underlines his familiarity with the Tuscan-Umbrian High Renaissance. This composition is particularly close to the style of Pietro Perugino, as the 2007 exhibition catalogue emphasises with reference to the work shown there. Some specific similarities to Perugino include the group of figures shifted asymmetrically in their general leftward tendency, Mary’s small blue shawl, and the decorated shawl borders and the nimbuses, both of which are done in powdered gold. These last two features correspond especially to Pietro Perugino’s Madonna with Child and the Infant St. John (ill. 2): “…the lettered strips on the shawl’s borders, filled with pseudo-Kufic symbols in the Italian painting and with a nonsensical sequence of Latin fragments in Cranach’s, as well as the nimbuses, which—in contrast to Cranach’s usual style—consist not of an implied aureola but of a contour shortened to an oval that is filled with golden dots in a rather loose, circular arrangement in the case of Maria and remains empty in the case of the two boys” (Exh. cat., Städel Museum/Royal Academy of Arts 2007, p. 146, cat. no. 17). As Dr. Dieter Koepplin likewise ascertains, this dotted Marian nimbus is based on Italian models, particularly that of Perugino, but is not unique in Cranach’s oeuvre—it is also, for example, employed in the two wings from a 1510 altarpiece showing St. Catherine and St. Barbara (Kassel, Staatliche Kunstsammlungen; see Dieter Koepplin [ed.]/Tilman Falk (ed.), Lukas Cranach. Gemälde, Zeichnungen, Druckgraphik (exh. cat., Kunstmuseum Basel, Basel 1974), vol. 2, Basel 1976, p. 682, no. 594 a, b).

Lucas Cranach the Elder
The artist Lucas Cranach the Elder was born in Kronach in 1472 and most probably first learned his craft at the workshop of his father, Hans Maler. It was only once he had left home that the artist began using the now world-famous name “Lucas Cranach”, which means simply Lucas aus Kronach [Lucas from Kronach]. Documentation from around 1500 indicate that Cranach, having spent a few itinerant years, had taken up residence in Vienna—which, as the imperial residence, was a cultural centre at that time and thus a place where artists quickly found numerous commissions. But just a short while later, Cranach was summoned to Wittenberg by the Saxon Elector Frederick the Wise (1463–1525) to succeed the Italian artist Jacopo de Barbieri (ca. 1440–1515/16) as Frederick’s court painter. This was a decision with far-reaching consequences, for Cranach thus moved to one of the most turbulent centres of the Reformation—where he was to remain until the end of his days, also working for the Saxon Elector’s two successors.
Once arrived in Wittenberg, Lukas Cranach also devoted a great deal of attention to woodcuts and newer printing processes. Furthermore, he soon prospered economically from his position at court, enabling him to move out of the electoral palace and down into town in 1507, whereupon he set up his own workshop—which proceeded to expand rapidly. In 1512, during the period that saw the creation of the present work and by which point Lucas Cranach was already a well-established artist, he married Barbara Brengbier (deceased 1541), the daughter of burgher from Gotha, who gave birth to their sons Hans and Lucas in 1513 and 1515 followed by three daughters. His sons went on to work at his workshop, which Lucas Cranach the Younger (1515–1586) eventually took over after his elder brother died prematurely. The Cranach workshop’s broad output encompassed secular decorative commissions for the electoral palaces, works for the church, and incomes as an oft-requested creator of portraits and numerous devotional pictures as well as mythological and allegorical scenes depicting ancient themes. The great demand for works by Cranach and the consequent profitability of his workshop are testified to by the fact that, in 1528, he was said to be Wittenberg’s wealthiest citizen; by that time, he owned several properties and also ran the city’s only apothecary. Cranach’s financial prosperity was followed by his social ascent: for an uninterrupted period running from 1519 to 1549, Cranach was a member of the town council, and he was also chosen as the town’s treasurer and even as its mayor several times (see Bodo Brinkmann, “Das Lächeln der Madonna. Lucas Cranach und die Folgen”, in: Exh. cat., Städel Museum/Royal Academy of Arts 2007, p. 17–28).
In 1517, after Luther had posted his famed theses, “Cranach apparently did not hesitate to place himself in service of the new cause as a pictorial propagandist.” He created leaflets, woodcut illustrations for Luther’s texts, and numerous images of the reformer (which at the time were in very high demand). “Apparently, Cranach’s relationship with Luther was not only personal but also quite friendly” (see. Brinkmann 2007, p. 20 f.). Martin Luther is documented as having been godfather to Cranach’s youngest daughter, and Cranach became the godfather of Luther’s firstborn son in 1525. Although Cranach played an instrumental role in creating the new Protestant iconography starting in around 1530, he also continued working on traditional pictorial themes and also continued to receive commissions from Catholics. He thus, through his painting, managed the diplomatic feat of holding his own amidst the on-going (religious and) political turmoil between the Roman Catholic Church, the Emperor, Martin Luther, and his patron Frederick the Wise as well as Frederick’s successors John the Steadfast (1468–1532) and John Frederick the Magnanimous (1503–1554). Cranach eventually even followed John Frederick to Weimar for two years as his court painter, and it was there that he ultimately passed away in 1553 at the age of 81.