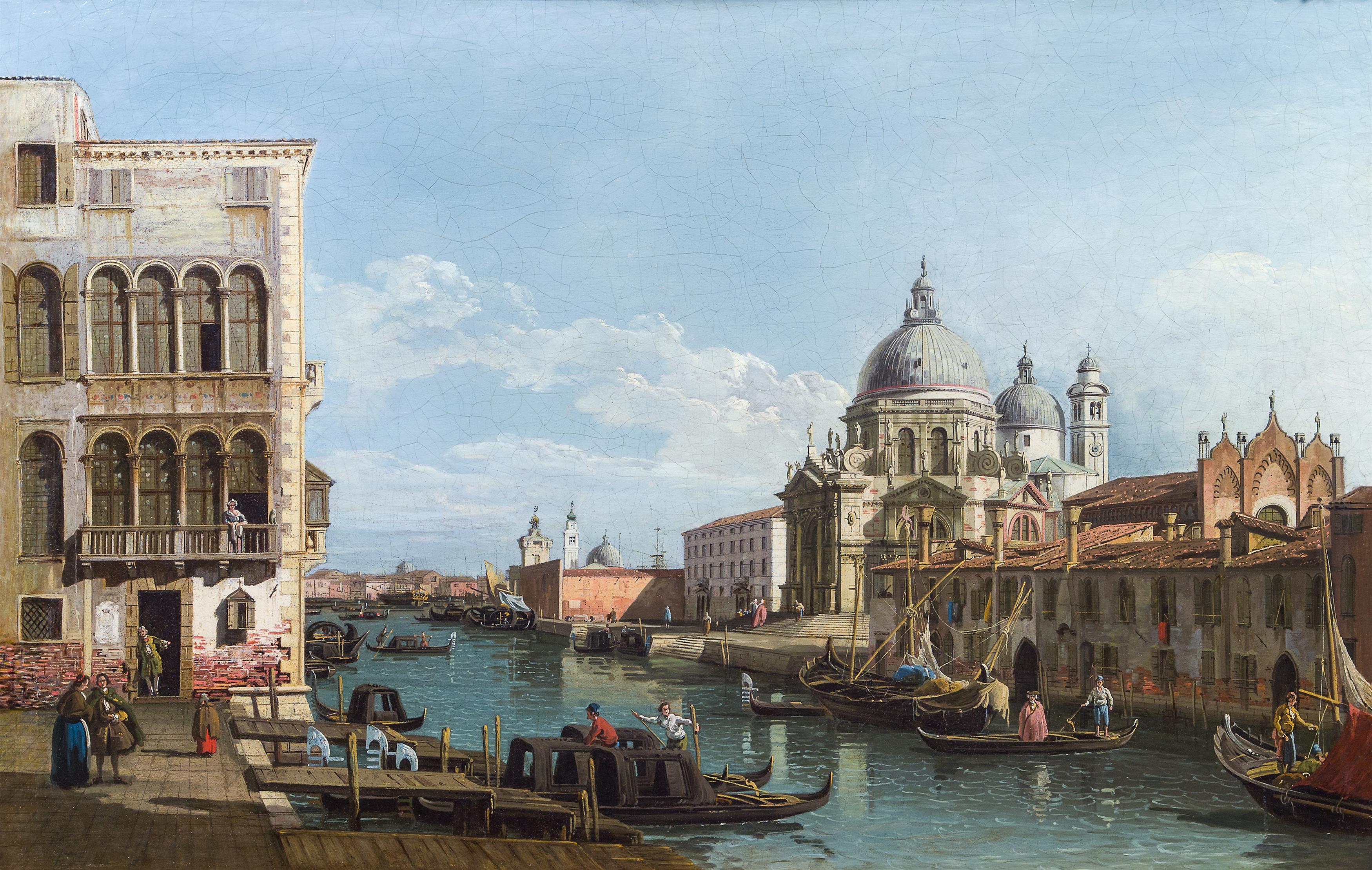 „The Entrance to the Grand Canal, Venice, looking East, with the Church of Santa Maria della Salute“
oil on canvas
63.5 × 98.5 cm

Provenance:
Mid of the 19th-century English private collection (ca. 1850 restored by Francis Leedham);
for at least since the 1920s until 1935 collection of Otto Hirsch (1874–1935), Frankfurt a. M.;
immediately after Otto Hirsch’s death in 1935 exported to Amsterdam by his heirs, and from there sold to
the Haberstock Art Gallery, London;
1937 bought by the Galerie Karl Haberstock, Berlin, and directly sold to the „Führermuseum“ (Linz);
1937-1945 private collection of Adolf Hitler, at the so-called “Berghof” at the Obersalzberg/ Germany;
in the 1960s bought by the father of the present owner from a famous Viennese art dealer;
since then private property, Austria

The eventful past of this extraordinary painting indicates that it changed its ownership in a hitherto not fully clarified way between 1935 and about 1965. However, the present owner – our consignor – is in any case, like his father before him, rightful owner of this painting.

The present painting has been published many times in the past. Recently rediscovered in an Austrian private collection, located for more than 50 years, this painting now could be studied and published for the first time in decades.

In the first publications – such as the catalogue of the exhibition at the Städel Museum in Frankfurt in 1925 – it has been published as an autograph work by Antonio Canal, called Canaletto. However, in 1962 W.G. Constable regarded this painting as a “school version” of the same subject, today located at the J. Paul Getty Museum, Malibu / Los Angeles and at that time recognized as Canaletto (W.G. Constable, op. cit., 1962, II, no. 180). But since its acquisition by the Getty-Museum in 1991 this painting is considered to be by the hand of Bernardo Bellotto, painted in the early 1740s in the workshop of his uncle, Antonio Canal. So it seems not to be surprising that in 1972 Stefan Kozakiewicz already accepted the present painting as an early work by Bernardo Bellotto also to be executed in the Canaletto studio. Since then the painting has always been published with the attribution to
Bernardo Bellotto.
The former difficulties in attributing the several versions of one subject executed in the closest circle of Canaletto can also be pointed out on the example of a painting sold in New York in 1995, which shows exactly the same view of the Grand Canal, looking East, like the present painting (Christie’s New York, January 11, 1995 , No. 25). In the past always published as Canaletto, it has finally been recognized as an early work by Bernardo Bellotto dated around 1742 (fig. 1). This example is typical for the difficulties and also the changing attributions between Canaletto, his studio and his school in the elder literature. Confusion about the authorship of individual paintings has already been described in the 18th century, when Bellotto’s first biographer, Pietro Guarienti, wrote in 1753: ‚his scenes of Venice were so carefully and so realistically done that it was exceedingly difficult to distinguish his work from his uncle’s (P.A. Orlandi, Abecedario Pittorico, Corretto e accresciuto da P. Guarienti, 1753, p. 101).

Antonio Canal led a successful workshop, in which also his nephew Bernardo Bellotto entered as student and employee around 1735. He remained there until 1747 when he left for the Dresden court of Augustus III, King of Poland and Saxony. Canaletto and the employees of his thriving workshop, but also other contemporary artists in Venice – some are assumed to be former members of the Canaletto studio – created typical atmospheric views of Venice for foreign clients (cf. Beddington 2010-11, p. 42-46). Particularly the travelers on “Grand Tour” could take these precious items home as a keepsake of the atmosphere and the life in the lagoon city. Successful compositions, like the present one, have been repeated in several versions and copies mostly for British clients. A proof that the present painting had also been in England in the 19th century, is provided by the impressed stamp by Francis Leedham on the reverse of the stretcher. He was one of the leading restorers in London in the mid-19th century and worked for both the National Gallery as well as famous private collections (cf. British picture restorers, 1630-1950, 1st edition, March 2009).

The view of “The Entrance to the Grand Canal, looking East, with the Church of Santa Maria della Salute” has been a remarkably famous composition in the 1740ies. Today the painting in the Fitzwilliam Museum, Cambridge, is regarded as the only known work with the same subject painted by Canaletto himself (fig. 3). In addition to a drawing by Bernardo Bellotto in the Hessian State Museum (fig. 2), today several other versions, probably all executed in the studio of Canaletto, have also been attributed to his nephew; for example the above mentioned large-scaled painting in the Getty-Museum and the one auctioned in 1995, further another version also in the Fitzwilliam Museum, Cambridge. But yet in his catalogue of the paintings by Bernardo Bellotto Stefan Kozakiewicz does not rule out the collaboration with another artist of the Canaletto studio both for the painting in the Fitzwilliam Museum and the present painting (cf. S. Kozakiewicz, op cit., II , No. 7 & 8).

The undeniable charm and the great success of this composition since the 18th century is probably originated in the extremely skillful choice of the view, which shows a variety of Venetian attractions at one glance: The Grand Canal with a view to the church of S. Maria della Salute and the Bacino di S. Marco; in the left foreground the Campo S. Maria Zobenigo with the Palazzo Pisona-Gritti; opposite the picturesque prospectus of different facades, dominated by the upper part of the church of San Gregorio; finally, the Seminario Patriarcale, the Dogana with the Campanile and the dome of San Giorgio Maggiore and in the distance the Riva degli Schiavoni.
In addition to the view itself also the atmospheric coloring characterized by Canaletto impresses the viewer. In the architecture, painted in warm ocher, white and rosé tints, the unique light, air and water-filled atmosphere of Venice is reflected. Over the roofs there is a blue sky interspersed with delicate white clouds; underneath, representing the lifeline of the lagoon city, lays the water of the Grand Canal, in various shades of green, from emerald to turquoise green, glistening and stirred by the movement of various gondolas. Both on the water and on land, numerous decorative figures bring the painting to life. Herein Bellotto’s work in the Fitzwilliam Museum is comparable with the large-scaled version at the Getty Museum, whereas the present painting corresponds – up to small differences in the background – to Bernardo Bellotto’s painting auctioned in 1995.